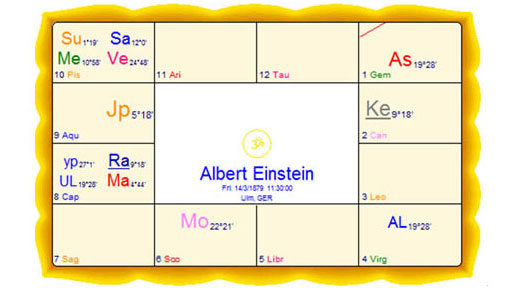 In India, the study of Jyotishshastra can be traced to the Vedic times (1500 B.C. – 600 B.C.).  Jyotish relies more on the sidereal (according to the stars) positions of the planets, just as one sees them in the sky, against the positions assigned to few relatively fixed stars. This ancient system of Indian Vedic Astrology is thus quite scientific in nature, and employs many mathematical calculations to arrive at astute predictions and prophecies.  Some even describe it’s study to be akin to astronomy.

The basic difference between Indian Vedic Astrology and the Western astrological traditions and systems lie in the technique of calculations. Western astrologers base their zodiac on the equinoxes. The positions of the planets the westerners calculate, continue to change with respect to the stars, is tropical. Jyotish, on the other hand, bases its computations on the twelve constellations from the Babylonian calendar.

The first thing you will notice when you compare a Western and Vedic chart is that the Vedic chart looks very different. You are probably familiar with the round shape of a Western chart; the Vedic chart is square. If you are familiar with Western astrology, upon careful examination, the Vedic chart will appear to have planets aligned with the wrong constellations (signs). A natal chart [or a birth chart] reading reveals the differing sign and house changes of planets in the Vedic chart.
For example, suppose, according to Western astrology, your Sun sign is in Capricorn. In the Vedic system, it could be in Sagittarius. Your rising sign and the other planets might also be in unfamiliar signs. However, this does not mean that Vedic astrology is inaccurate. It simply calculates a horoscope differently. The interpretations are most often more precise than in Western astrology.
Western astrology emphasizes the psychological nature of the individual, but lacks reliability for predicting future cycles and events. Although Vedic astrology also defines a person’s psychological nature, it gives more focus to understanding when certain events are likely to take place.

The times of life events are shown through a detailed system of planetary time cycles, called “dashas.” There is no corresponding method in Western astrology. Western astrologers who make a study of it, often find themselves converting to Vedic astrology because of its greater scope, depth and accuracy in forecasts.

The debate between the two zodiacs is, of course, centered around one main question, “how can both systems be right?” How can I be both an Aries in the Western system and a Pisces in the Vedic system?

It could be argued, first of all, that it’s rather simplistic to identify yourself by only one particular sign like we tend to do in the West. This is more of a recent cultural phenomenon due to the popularization of horoscope columns. In the more distant past, Western astrology was oriented more to the ascendant than the Sun if it had to be limited to one sign. Vedic astrology today favors the emphasis of the ascendant and the Moon over the Sun as well.

This makes sense because the ascendant is the starting point of the horoscope and the quickest moving indication in the chart so is could be considered more personally associated with your identity or “you.” In practice, the ascendant or 1st house relates more to one’s self, identity and personality traits than any other house.

However, if you asked someone in India “what’s your sign?” they would likely assume you mean their Moon sign, since Vedic astrology is a Moon-based system and it’s primary predictive systems are based on the Moon.

The footer area here is fully widgetized, with widgets appearing in one, two, as well as three columns. Insert as many as you’d like, or none at all; it’s completely up to you.